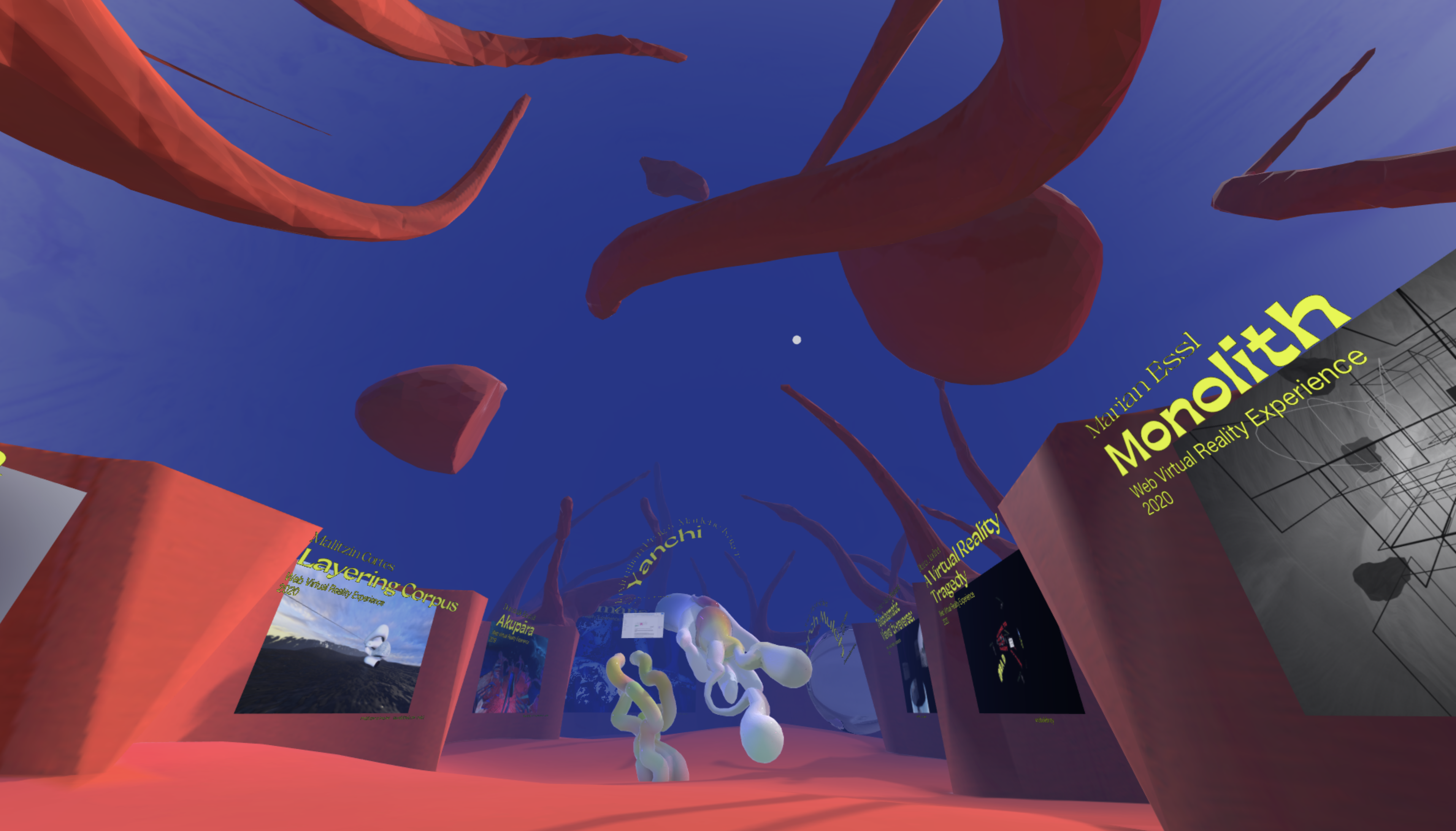 In cooperation with the VIENNA DESIGN WEEK the second exhibition of the Area for Virtual Art goes online! Under the title “Experiencing extended realities” we present the works of nine (inter)national artists who deal with the virtual as a new space of possibilities for their art. Most of the virtual artworks were created for the Area for Virtual Art or adapted for our virtual space. We see the digital as a laboratory in which we can make new experiences and experiment with our ideas of reality. The artistic and playful approach to the virtual space and to ourselves as avatars poses a challenge to our self-image and to our own construction of identity.

The Area for Virtual Art enables us to teleport from world to world, from artwork to artwork, and to (re)discover new places and approaches together with others. Throughout the exhibition, we invite our visitors to immerse themselves in unexpected environments and expanded realities.

Claire Hentshker‘s 360° video “Merch Mulch” is a tour through a shopping mall in Florida that no longer exists. The digital space explored in this piece is made from collected youtube videos shot inside of the abandoned shopping mall before it was torn down. Using a process known as photogrammetry, the 2D frames from the original youtube videos are used to make 3D models of the mall’s interior. The path through the virtual space traces the original path of a stranger’s camera. The areas they captured and uploaded to youtube become broken three dimensional forms, and the areas that do not appear in the original video become empty space.

Malitzin Cortes’ Web VR Experience “Layering Corpus” deals with the nature of the pavilion as a multi-sensory, impossible architecture that materializes only for a short time. Using the possibilities of Virtual Reality as a technology that opens up unimagined visual, spatial and sonic potentials, she explores the question of whether it is really necessary to create spaces that resemble reality? If we were to engage in pure speculation, would it be possible to do everything we imagine?

Ayo Aloba’s work “Alkebulan” aims to weave a heightened form of reality embedded in Afrocentric narrative intersecting pre-colonial mythologies, music, metaphysics, technology and political identity challenging the normative approach of western, indoctrinated stereotypes. The name Alkebulan or “Mother of Mankind” according to some historical sources was widely referred to the black continent before Africa became its current inception. Alkebulan is the oldest and the only word of indigenous origin. The Moors, Nubians, Numidians, Khart-Haddans (Carthagenians), and Ethiopians all adopted the name accordingly before the Europeans arrived in Africa with colonialism in the late 17th century.
“Time is nothing but impermanent, a fluid occurrence that enables the initiated to see beyond the five realms of sense.”

For the Area for Virtual Art Virgil Widrich & Martin Reinhardt combine their two artworks “Teleplasmatic Views” and “tx-reverse” to create an immersive Web VR environment. The video installation “Teleplasmatic Views of Vienna” deconstructs and reinterprets the most photographed city motif in Austria, St. Stephen’s Square in Vienna. Traces left on the square by thousands of tourists every day manifest themselves, similar to the physical square, in the video work only for a brief moment before they diffuse into the cityscape as an ephemeral layer of memory. The 360° work tx-reverse is based on the technology tx transform, which Martin Reinhardt invented in the 1990s. The fim technique turns the habitual perception of time and space upside down and opens up a universe of images never before seen.

The Virtual Reality Experience/ Platform “Yanchi” by Maximilian Prag and Marlene Kager is a first person player experience navigating a hybrid virtual club injected with digital art and music experiences. The player gets to discover the world at their own pace and is invited to linger and listen to mixes that are embedded into each stage constructed respectively to the musician’s vision. The virtual festival space  is constructed around stages hosting mixes by Fauna, ID Klang, Bushra and Tony Renaissance. Additionally, it shows artworks by Valentino Skarwan, Marlene Jonane and Andreas Palfinger. The project is set to be updated and extended with more artists to follow.

The video version of Daryna Fez‘ Virtual Reality experience “People” shows a dark room with human figures – close together, whispering, strange and human at the same time. When touched accidentally, the figures disappear.
Daryna Fez deals with digital technologies as a spiritual achievement and development of mankind and at the same time points out the uncanny in it. We have not only succeeded in creating machines that surpass humans in speed and power, but that have now attained properties that were originally considered exclusively human. This step opens up new possibilities, but also frightens us and creates new questions and responsibilities: what place do new organisms take in the human world? Is the virtual becoming increasingly similar to the real?

The web based virtual experience and multimedia installation “A Virtual Reality Tragedy” by Diana Andrei questions VR’s pioneering qualities in terms of originality and creation. Is designing VR something new or are we just running circles in our own minds? Assuming that we humans can’t escape our own heads and normative systems and beliefs of (pictorial) design (just like we can’t imagine colors we don’t know), “A Virtual Reality Tragedy” embraces this seeming failure and actively reproduces and references diffusely intersecting 2D images, videos, text bits and 3D objects. Catherine, the by default feminized virtual assistant of this tragic world functions as the narrator, simultaneously masking and emphasizing the artificial construction of human-based creations by mocking strategies of immersion but also revealing the gaps and potentials that arise from failing our own expectations.

The artwork „Akupāra“ created by Dominik Einfalt is a Virtual Reality experience that immerses the user into the middle of a spiritual ritual from an unknown culture. You become part of a ceremony in which an ordinary stone is elevated to a transcendental object. The creatures are too occupied by their beliefs to realize the genuine nature of their surroundings. Only by unleashing yourself and exploring the environment one can experience the truth about this place.

The audiovisual virtual work “Monolith” by MONOCOLOR creates an immersive experience that envelops audiences in sound and an abstract landscape. A black cuboid forms the center of this audiovisual sculpture. Around this central point, geometric structures and curved lines are layered, which are bounded by a spherical space. By shifting these elements in perspective, new forms are constantly created when entering the sculpture. 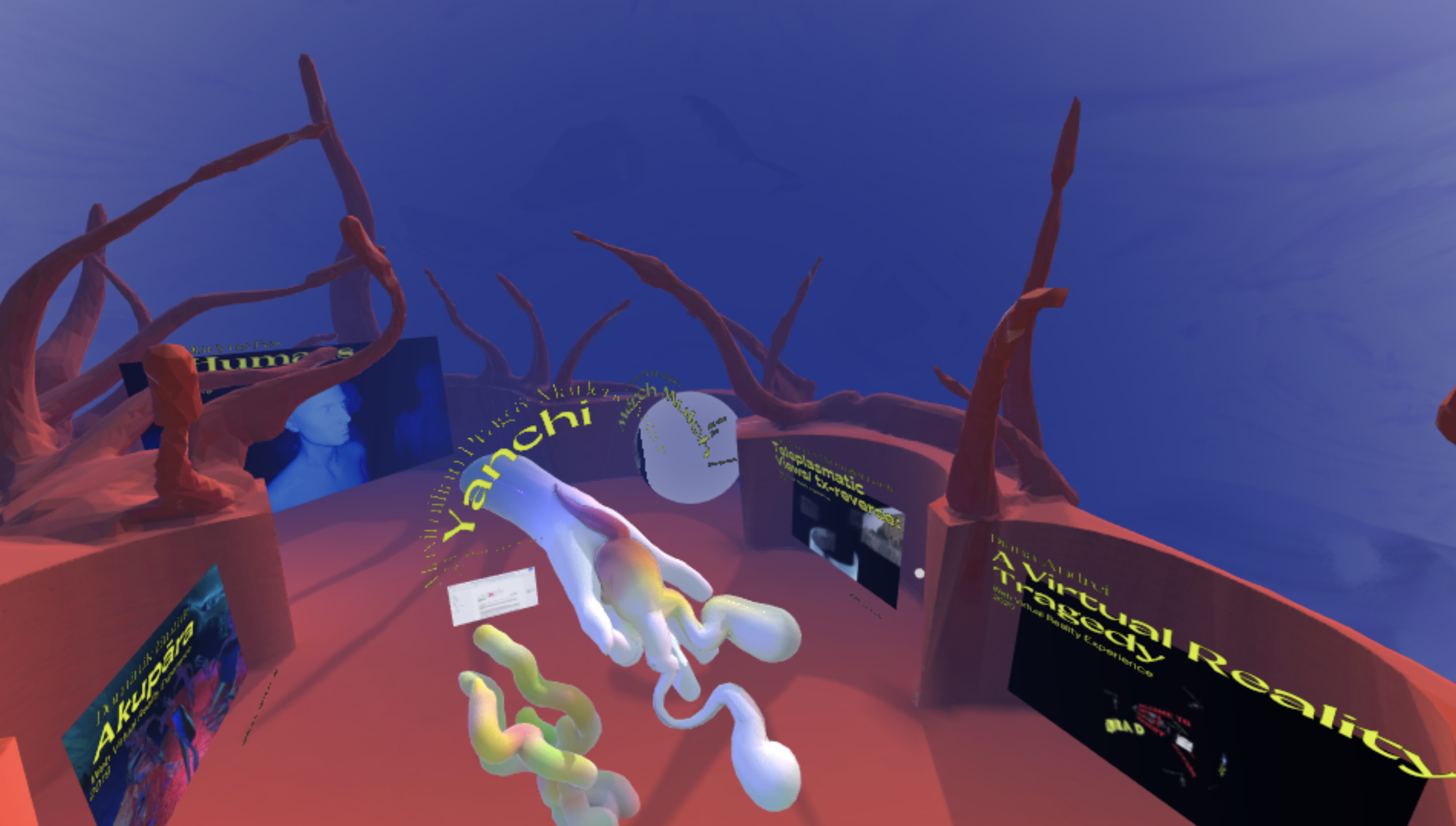 In architecture, portals constantly offer opportunities to access new spaces and discover new things. This is the function of the Festival Headquarters of the VIENNA DESIGN WEEK, whose location changes every year: It welcomes the public and helps to find the way through the program. The fact that this central physical place now has a digital counterpart may well have been triggered by COVID-19, but this is far from being the only reason. The decision to create a setting that is specially designed for experiencing digital content is much more a result of the respective focuses of the festivals in 2018 (Virtual & Augmented Reality) and 2019 (Game Design).

Hence, together with a working group of experts and a wide range of external partners, the VIENNA DESIGN WEEK has created a virtual space that regards a digital presence not as an emergency solution but as an autonomous form of expression – an experiment full of immersive encounters, which visitors can experience on their own smartphones, computers, or VR glasses and the platform Mozilla Hubs, independent of their location. A portal to this virtual world, in which design tools are just as urgently needed as they are in our tangible reality, can also be found in the physical Festival Headquarters.

The Virtual Festival Headquarters has been developed in cooperation with Wilhelm Scherübl (Architect and artist), Martina Menegon (Artist) and Eva Fischer and Angie Pohl (sound:frame, Area for Virtual Art).

Auditorium at the Festival Headquarters 12., Hufelandgasse 2 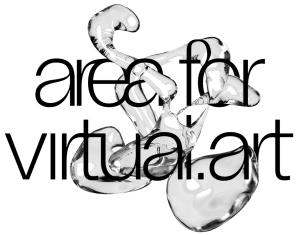 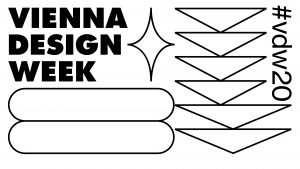